On the special occasion of the UN International Day in Support of Victims of Torture, 26 June of this year, TPO Cambodia has joined to raise awareness to honor torture survivors of the Khmer Rouge regime.  TPO’s staff at the Phnom Penh headquarters and beneficiaries who are victims of torture in Pursat province under the ‘Healing and Reconciliation for Survivors of Torture during the Khmer Rouge Regime Project’ funded by USAID were involved in this activity. Key messages included, ‘We care about and support the mental health of survivors of torture during the Khmer Rouge regime;’ ‘We stand together to fight against torture;’ ‘We join together to end gender-based violence;’ ‘We work together to stop discrimination against survivors of torture.’ They have been disseminated to the public digitally. They were highlighted in a video clip, which was published on TPO’s Facebook page https://www.facebook.com/tpocambodia/ — which is followed by nearly 10000 people! 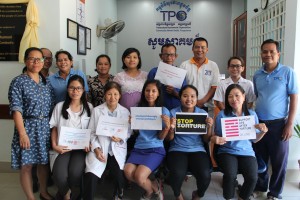 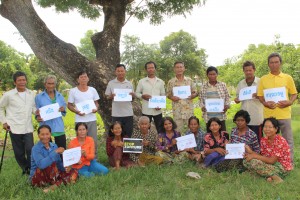