On the weekend of 20th – 22nd January 2017, Chaktomuk Theatre in Phnom Penh hosted a performance never seen before. The dance ensemble of Khmer Arts narrated stories of forced marriage under the Khmer Rouge regime through the expressive gestures and movements of classical Khmer dancers. The audience was completely captivated, among them 150 Civil Parties (CPs) from all over Cambodia, themselves victims of forced marriage and sexual violence, who were invited by the ECCC to receive this unusual reparation measure of the ECCC for the crimes committed by the Khmer Rouge regime. The performance was part of the ongoing “Phka Sla Anchor Krom” project, planned and implemented with funding from GIZ and SDC by a consortium of 4 organizations, each with distinctive responsibilities: Khmer Arts Academy, Kadei Karuna, Bophana and TPO.
All along the development phase in 2016, civil parties were consulted to draw from their real life experience and feed back into the art process transforming testimonials into poetry, music and dance. All along the consultation events and the final performance nights, TPO counselors supported civil parties psychologically, as the vivid scenes of violence and suffering touched on their affective memory and triggered strong emotional reactions. On the 3 opening nights, TPO provided briefings and debriefings to the audience and remained close with the civil parties during the performance and the following panel discussion. TPO will also continue to support the involved dancers and musicians with self-care sessions, as they have personal involvement into the topic and are deeply touched by the roles they are incorporating.
Through a 12 question survey, TPO collected information from the audience, to understand how the confrontation with such painful topics of forced marriage and sexual violence was perceived, what is known from their own families and how they envision gender equality in the future.
Additional funding from USAID in 2017 will enable the “Phka Sla” project to stage 1 more show in Battambang and in Kampot, accompanied by the multimedia exhibition of KdK, psychological support staff from TPO and the camera team from Bophana, who will produce a documentary to be shown nationally through television. 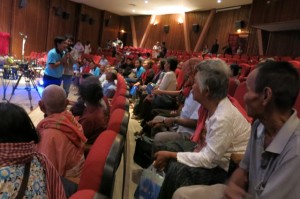 TPO counselors provide debriefing or psycho-education to CPs after performance. 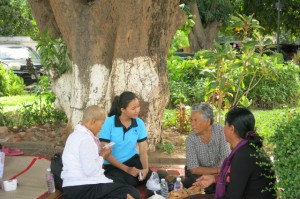 TPO counselor provide psycho-education or briefing before the dancing performance