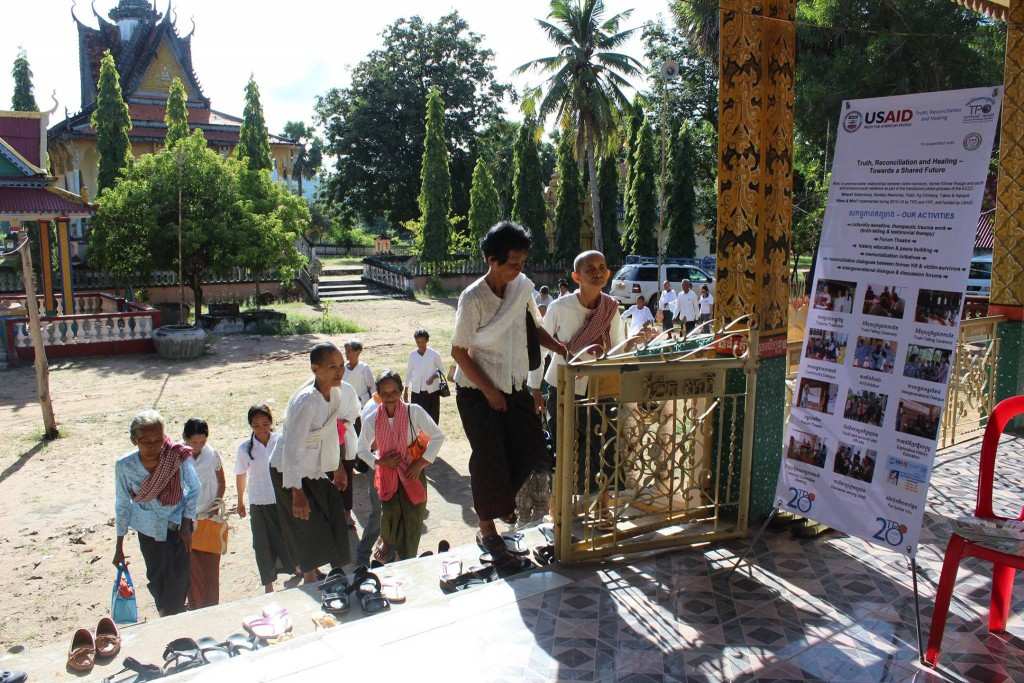 Participants arrive at the pagoda for the Truth-Telling Ceremony organized by TPO Cambodia.

“…..I am feeling so excited, even though I am a former Khmer Rouge, I will have a chance to talk about my bitter story. This will help me to relieve my suffering hidden in my heart for more than 30 years, which in this lifetime will never be forgotten…..”.

This is an extract from a testimony of a former Khmer Rouge which was read aloud at our Community-Based Truth-Telling Ceremony at Balang Reangsey pagoda, Krang Leav commune, in Kampong Chhnang province, last week. Also, testimonies of 6 former Khmer Rouge and victim survivors were read aloud in presence of hundred of guests including representatives from USAID and DFAT, Rolea B’ier district deputy governor, staff of provincial departments, commune and village chiefs, students, teachers and community people. Their participation importantly contributed to a long-term healing and reconciliation process. On this occasion, we also integrated Christian prayers for peace and forgiveness at the Buddhist pagoda for a Khmer Rouge survivor whose religious belief is Christianity. We believe that one aspect of peace and reconciliation prevailing among Khmer Rouge survivors and their community is the respect for the diversity of religious beliefs for the survivors so participation in the healing process is non-discriminatory. TPO receives funding for this program from the American people through USAID under the project “Truth, Reconciliation, and Healing-Towards a Shared Future”.