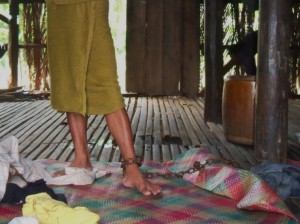 Sokun* smiles. He feels well. He is leading a normal life, helping out and working at home and on the farm. He feels part of the community.  But it wasn’t always so.

Sokun* was found chained with one leg to the middle pillar of an old house. He looked pale, was thin, and dirty. He was aggressive towards others.  He was withdrawn and communication with him was impossible. Because of his mental illness, he could not think clearly, was delusional, talked to himself and had hallucinations. His family had taken him to see a traditional Khmer healer, who had performed rituals, but this had not helped or cured him. He remained violent and had damaged other people’s property. As a result, Sokun was abandoned and chained. His family lacked understanding of mental health issues, how patients can be helped, and had no financial resources to deal with the situation.

Then a Village Support Health Group (VSHG) which had been trained by TPO Cambodia in basic mental health came across Sokun. They informed and consulted a TPO social worker who then worked with Sokun and his family and community as well as TPO Cambodia, on a comprehensive treatment plan that would help Sokun to get better, be unchained and live a productive life in the community.

Sokun received medical treatment at a local health center that TPO helped to set up and is supporting. He was prescribed some medication. Sokun, his relatives and some other key people in the community benefitted from a series of home visits by a TPO social worker. TPO met with the family, neighbors, the VHSG and the village leader to seek and ensure local resources for the care of the Sokun. VHSG and TPO supported his family psychologically throughout. 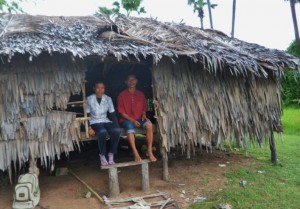 As a result, Sokun’s mental health has much improved. He is no longer chained and is now able to help out with work around the house. Villagers have stopped discriminating against him and are supporting him. Sokun is no longer abandoned. His life has changed dramatically – from utter despair and abandonment, to one of freedom, feeling accepted and able to contribute to society.

With Cambodia’s mental health system still in its infancy – and until a solid nationwide system is effective – we at TPO cannot just watch and stand by when we find out about mentally ill patients living in inhumane conditions. To help more patients like Sokun* and support their families and communities through education, we are raising funds during June 2015.