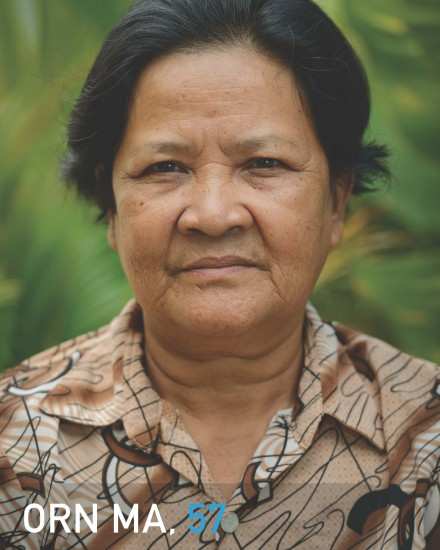 ‘I remember the day I filed a complaint to be a Civil Party in Case 002.
I hope that the Tribunal prosecuting those five accused
somehow will make up for my suffering.’

My name is Orn Ma and I am 57 years old. I am a widow. My husband died during the Khmer rouge regime, which left me and my daughter on our own. I would like to tell you about my past and my family background. My parents had been living in Kampuchea Krom (1) ever since 1937. They were farmers and had six children. I was the third child. Only my oldest brother had a high school education. The rest of us dropped out of school after primary school because of my family’s financial situation. In 1970, the conflict between the Viet Cong (2)  and Tiv Ki (3) started and reached the Cambodian border. There were so many problems. These included robberies, poaching of our cows and chickens, our homes being burned down as well as the rape of women and killings. These things happened on a daily basis. Because of this insecurity, my parents agreed that I’d marry a soldier. I came to Phnom Penh to live with my husband.

In 1972, my entire family came to live in Phnom Penh. My older brother was a Lon Nol soldier (4) and was married. He had two children.

In 1975, the Khmer Rouge took over the country and forced people to leave the cities for the provinces. They set up checkpoints to look for high-ranking soldiers, officials, well-to-do people or anyone whom they considered to be their enemy. Words failed us when we had to say goodbye to each other. We were separated from each other shedding tears. My mother fainted when my brother was arrested. It was so cruel. The Khmer Rouge pushed my brother back and forth, and then used a wire to make holes in his hands. He had to walk alongside twelve other soldiers. We walked from the city to Ta Am village, Som commune, Kirivong district, in Takeo province, for 15 days. The Khmer Rouge told every man to cut wood and build huts. Then we had to do whatever work they ordered us to do. My father was told to water vegetables. So he was farming. My husband carried potatoes from the mountain to the village. My mother was told to farm, build dams and plant corn. We, the children, worked in a children’s camp. We worked all day long and also during the nights. We worked as if we were in hell, realizing that the murderers could kill us any time.

My husband and I often said to each other, ‘Even though it is very difficult for us, at least we are together.’ We had been living like that for about 20 days, when the Khmer Rouge told my husband to be ready because Angkar (5) required him ‘to study’. (6)  My husband looked at me and said, ‘Please take care of our children. If I am lucky, I will come back to you. It is my turn now.’ The Khmer Rouge pushed and kicked him. I was holding a hoe and watched my husband walk through a rice field until he disappeared and reached Chak Mrak Mountain. Two hours later, a Khmer Rouge soldier came and asked me, “Comrade, do you miss your husband?’ This guy was wearing my husband’s clothes. I remember this clearly. My heart almost burst and I was trembling, but in fear I responded to his question saying, ‘No, I don’t miss him, because he went to study.’ My answer saved my life. One month after I lost my husband, my three-year-old daughter came down with a severe fever. I was very worried because we did not have any medicine or doctors. I gave her traditional medicines each day. In the end, I lost her. It was so painful for me to accept this. Every day I told myself that my husband and my daughter had not left me on my own on purpose and that they were still with me. I worked hard to survive. I lived in fear most of the time, but I worked to cook porridge with morning glory or corn to keep myself, as well as the baby inside me, alive. While I worked so hard, I felt totally exhausted and sweated a lot. I got stomach pains and bleeding, so I miscarried and lost my baby at four months. Despite this, I did not dare to talk about it or even mourn.

The Khmer Rouge did not allow me to go back to the camp, but told me to rest under the trees and wait until the other workers came back to the village after work. The next morning, I was told to go back to work and work until the end (7), because the Khmer Rouge considered me to be the wife of their enemy. My health was in a terrible state. I had lost my hair and was very thin. My father collected some tree bark and boiled it to make medicine for me every day. There was too much work for us! We had to follow the Khmer Rouge’s orders. Five months later, I heard that two of my siblings had disappeared from their mobile team for no reason at all.

In 1976, my health improved and the Khmer Rouge told me to work in the rice field. This was not different from the work I did before – I had no time to rest and I lacked food. One day, there was morning glory growing in the pond. Just seeing it made me very hungry. When I was given the usual serve of porridge, I picked three or four stalks of morning glory to put into my porridge, but I was accidentally seen doing that by the Khmer Rouge. A female Khmer Rouge soldier, who was a very mean person, shouted at me, ‘Do you want to die like the other enemies too?’ She came towards me pointing at me, and grasped my hand strongly. It hurt a lot. I cried and said, ‘Please forgive me. I am in such pain.’ She pulled my hair, tied my hands behind my back and forced me to walk past many people. Still, I kept my eyes on my porridge because I was so hungry. An abandoned old house located in Angta Ngorl village, had become a detention center. A female team leader cursed me very badly. I begged her not to kill me so I could raise my children. I was terribly hungry. My hands were tied and I could not see or hear anything around me. During my time there, the Khmer Rouge cursed me all the time, threw porridge and water to drink at me and they interrogated me twice per day. I prayed to the soul of my husband and to the gods to calm down the female leader so that she would let me live. I was so shocked and frightened then. I heard and saw my husband who had come to tell me, ‘They will release you soon.’ I felt hope again because of his voice. His deeds still remained in my heart and I felt better when I thought of him. One day, the team leader released me from the detention center in Angta Ngorl and I went back to the village. I saw my mother with her head shaven. She was so happy and smiled at me in tears. She told me, ‘I wished to the gods that they help you and now you are back.’ I asked her why she had shaven her head and she replied, ‘I did it because I have a lot of lice.’

In 1977, I still lived in hell. By then, I felt totally defeated. I did not dare to look at fruit, vegetables or anything at all, and I tried not to feel hungry because I was afraid of being arrested again.

In 1978, the Khmer Rouge organized marriage ceremonies, forcing people to marry each other and make commitments. My team leader asked me to be ready to make my commitment. I begged to the soul of my husband to help me and not to let this happen to me. I did not want to marry anyone else but my husband. We were to be faithful to each other for our joint life time. My wish came true and it seemed as if there was a magic involved. On the day [of the forced marriage], the Khmer Rouge just forgot about me and I was no longer forced to get married.

Six to seven months later, my father fell ill. His body was swollen and he was worried sick about his children. He passed away leaving me and my mother on our own during the regime.

In 1979, the Khmer Rouge regime came to an end and the government soldiers started to build this country up again. People came back to their hometowns and did their daily work to support their families as had been usual.

In 1982, my mother and I started to produce rice for three years. Later, the authorities started to measure the land and share it to different families.

In 1991, my mother was still experiencing grief and her cancer was becoming worse. She passed away, so I lived on my own with my daughter and waited for justice to come.

I remember the day I filed a complaint to be a Civil Party in Case 002. I hope that the Tribunal prosecuting those five accused somehow will make up for my suffering. I wish to join the proceedings in Case 002 as a Civil Party without any discrimination, to seek the truth from those five accused, to teach the next generation to not follow the same path as the Khmer Rouge, and to request other stakeholders to assist us in finding justice for Khmer Rouge survivors and the dead during the regime.

Whenever I go to a pagoda, I participate in Buddhist ritual ceremonies and dedicate them to my beloved relatives.

They are the following:

I wish that they can rest in peace and happiness forever.

1 An area in southern Vietnam that was once part of the Khmer Empire.
2 The National Liberation Front for South Vietnam, known to the South Vietnam government as the Viet Cong, was a political organization and army in South Vietnam and Cambodia that fought the United States and South Vietnamese governments during the Vietnam War (1959–1975).
3 A Vietnamese faction.
4 She is referring to the Republicans. Lon Nol was the President of the Khmer Republic which preceded the Khmer Rouge regime. He fled the country in 1975.
5 The CPK (Communist Party of Kampuchea) referred to itself as ‘Angkar’ which is the Khmer word for ‘Organization’.
6 During the time of the Khmer Rouge, people knew that this term referred to being punished, most likely killed, because no one ever came back. The Khmer Rouge didn’t say directly that they were going to kill someone, but used other words instead, such as ‘to study’. For the Khmer Rouge ‘to study’ stood for ‘enduring punishment’, but in reality hardly anyone survived the punishment, hence it indirectly meant ‘being killed’. People knew what was coming when the expression was used.
7 Until she would die.