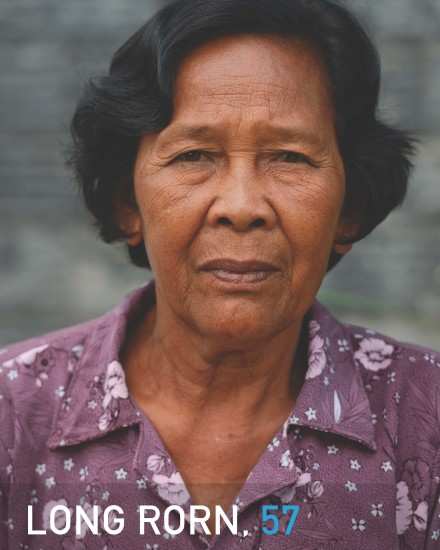 ‘During a visit to S-21… I discovered a picture of my brother at the center. When that happened, I almost fainted and could hardly breathe. Some villagers helped me by giving me a massage. I was so shocked and overcome by grief. Once I felt confident enough and understood the legal procedures, I decided to file a complaint against Duch as I believe he is the one who killed my brother.’

My name is Long Rorn. I am 66 years old. I have seven siblings: four brothers and three sisters. I have two children: a son and a daughter. Currently I am living with my daughter and three grandchildren. My rice field is my personal mental resource. When I think about last year’s rice harvest, I feel very happy. I feel safe, especially while harvesting with my children and other villagers. We harvested more rice than the year before. I lived with my parents – my father Phen and my mother Yorn – close to where I am currently living. When I was 10 years old, my mother had a severe infection. There was no proper doctor in the village, so she was treated with Khmer traditional medicines. However, she did not get better, and passed away. My father worked both as a mechanic and a construction worker and was based in Kampong Cham. I did not go to school in those days but helped the family by taking care of the cows, growing rice, picking fruit or vegetables and selling goods in the market. Some of my brothers and sisters worked in a clothes factory but they had a very low salary (25 Riel per day). Some siblings got married and left the house. I stayed with my father and the younger siblings. My father married another woman when I was 15 years old. His second wife treated me very badly. She forced me to overwork, cursed me, did not give me enough food and was often angry with me. Sometimes she beat me up. One day, she kicked me and I fell from the kitchen and onto the ground.

When I was about 17 years old, I became engaged. My father had decided that I should marry to avoid further trouble between me and my stepmother. I had a very difficult life with my husband because we were both from poor families and farming was the only way he could making a living. After the farming season, I tried to earn some money by buying goods at the market and selling them in the village.

I had two children within three years. I haven’t had any other children since I was 25. My children did not go to school because they were still too young for that when the Lon Nol regime (1) began. We continued farming and my husband managed to avoid being conscripted as a soldier. He requested to be a guard in the village instead. One of my brothers joined the Khmer Rouge and disappeared.

In 1973, the fighting between the Lon Nol army and the Khmer Rouge army intensified. Most people from my village were deported to Ta Oung village, Ta Oung district, Kampong Siem commune, which was controlled by the Khmer Rouge. My family members were separated from each other. One of my younger brothers was a guard, but had to travel a lot through Khmer Rouge areas for his work. Unfortunately, he was arrested and killed while he was in an area fully controlled by the Khmer Rouge. His wife witnessed her husband’s arrest and she begged the Khmer Rouge not to kill him, but they shot both of them dead. She was seven months pregnant. I knew the killer very well, and I was very angry, but I did not know what to do.

One day, my husband was asked to plough an area where there were many landmines, but he was suffering from stomachaches so could not go. The Khmer Rouge cursed my husband very badly and accused him of pretending to have stomachaches. They threatened to kill him saying, ‘You should wear a raincoat.’ This meant that the Khmer Rouge wanted to tie him up and wrap him in a Lon Nol raincoat (2) as this would cover him fully and no one would be able to see who was in that raincoat. I begged the Khmer Rouge team leader many times until they finally let my husband go.

Almost every night, around 1 am or 2 am, I heard entire families cry, the children and the elderly included, as they walked passed my hut. I made a hole through the wall and watched them. I saw many people – family groups – with their hands tied behind their backs and roped together so that they had to walk in a line. Sometimes, I saw between ten and twenty people in a single line as the Khmer Rouge lead them away to be killed. I thought that those people had probably made a mistake. I asked others, and they told me that those people stole things from the Khmer Rouge. I was so afraid. Later I saw the heavy smoke when the Khmer Rouge were burning the victims’ clothes after the had killed them. This reminded me of what I had been told by some children, who were taking care of the cows in the fields, about how the Khmer Rouge killed villagers. Those children witnessed the killing of children who were younger than them. The Khmer Rouge threw younger children against the trees. Some were thrown into the air and bayoneted as they fell back down, their bodies punctured. Some of the Khmer Rouge also liked children, but they did not dare to let those children survive.

In the period 1976–1977, I was transferred to help construct Truoy Chek Dam during the dry season. I stayed in a hut with many other women. My husband was told to transport wood to the construction site. I remember that, one day, my husband stole crispy fried rice mixed with sugar, but he was caught. The Khmer Rouge did not even take the crispy fried rice back, but blamed him and threatened to kill him. I was so afraid at the time. It reminded me of how I once kept one dried fish for my father, who lived close to my village, while he was ill. I managed to bring it to him but I lived in fear and was so afraid the Khmer Rouge would find out about it.

In 1978, the construction of the dam was finished and I was ordered to farm in a mobile team. Later on, I was told that my cousin, who used to be a team leader and had by then been transferred to work in different villages, had also been killed for stealing things. This made me very frightened and worried that the Khmer Rouge would also find out about me. I worried a lot and cried a lot when I was on my own.

In 1979, Vietnamese troops came and reached the east of Tonle Bet. The situation was terrible. There were planes flying over us. Shots were being fired from the planes as a way of telling the soldiers on the ground where to go. Many villagers and I had to run through those shots. My family was very frightened and escaped into the forest. Finally, the Khmer Rouge cadres gave up and ran away alongside the villagers. After the combat, I returned with other villagers to our village. The local authorities distributed farming land to each family, and we started to farm and plant crops, which we have been doing until today.

My husband, my children and I survived the Khmer Rouge regime, but my older sisters and brothers, who lived in different places during the regime, never came back. I believe they all died. Some people from Phnom Penh told me that my brother, whose name was Chhoeun, had been transferred to work in S-21 (3) during the regime. He did not have a wife. He ended up being killed during the turmoil in 1979. I regret that he joined the Khmer Rouge movement, but in the end, the Khmer Rouge also killed him. Each time I join a Buddhist ceremony, I dedicate it to his soul.

In 1982, my oldest son was conscripted and based at Phnom Krohom. He was allowed to visit home only once a year. I begged the authorities not to conscript my son, but they refused. I felt hopeless as I could not even protect my son. I begged them many times to not send him to the battlefield. When he finished his obligations with the army, he married and worked as a construction worker. He grows rice regularly. He now has five children. My daughter married a construction worker and has three children. Unfortunately, her husband had an affair with another woman and has left the family to live with his second wife. He does not care about the family and his children. That’s why I decided to take care of the children which I have been doing until now. In 1997, my husband died from a heart attack when he bowed paying respect to our ancestors during a ritual ceremony at home. Lots of people came to his aid and helped him breathe, but he could not be revived. I was grief-stricken and did not understand why he had to leave us because we were finally living in peace.

During a visit to S-21, organized by the Victims Support Section (VSS) of the Extraordinary Chambers in the Courts of Cambodia (ECCC), I discovered a picture of my brother at the center. When that happened, I almost fainted and could hardly breathe. Some villagers helped me by giving me a massage. I was so shocked and overcome by grief. Once I felt confident enough and understood the legal procedures, I decided to file a complaint against Duch (4)  as I believe he is the one who killed my brother.

I want to see the Khmer Rouge face justice and take responsibility for killing my brothers and other Cambodian people. I also ask that the court gives me financial reparations to conduct ceremonies dedicated to my family members, especially my brother who served the Khmer Rouge but got killed in the end.

I would like to dedicate my testimony to my family members who died during the Khmer Rouge regime:

1 Lon Nol was the President of the Khmer Republic which preceded the Khmer Rouge regime. He fled Cambodia in 1975.
2 Lon Nol soldiers had raincoats, but the Khmer Rouge used these to wrap up dead bodies. Hence the expression ‘You should wear a rain coat’ was used by the Khmer Rouge to threaten to kill someone.
3 The Khmer Rouge’s notorious Security Prison 21 (S-21) was housed in a former school building in Phnom Penh. From 1975 to 1979, an estimated 17,000 people were imprisoned, tortured and exterminated at S-21. At present, the site houses Phnom Penh’s Tuol Sleng Genocide Museum, which is open to the public.
4 Kaing Guek Eav alias ‘Duch’ was the Chairman of the Khmer Rouge S-21 Security Center in Phnom Penh. He was the defendant in Case 001, which was the first case before the Extraordinary Chambers in the Courts of Cambodia.