HEM Soeurn’s Story – the Right to the Truth 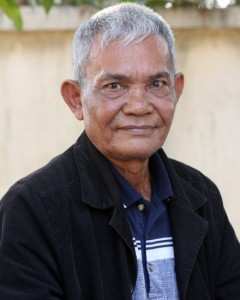 I kept this story hidden until recently because I thought that it would bring me even more suffering and shorten my life.  But the opposite is true – when I disclosed my story with the support from TPO Cambodia, I felt relieved.

“In 1976, I was arrested and heavily tortured at Kdaing Nhgear Pagoda. I was chained by the legs and tied up to a tree by the hands, exposed to the sun, rain and wind for many days. It was utterly inhumane. They accused me of being a CIA spy and subjected me to intense torture and interrogations. When they did not get the answers they wanted, they covered my face with plastic until I became unconscious, and then threw water on my face until I regained consciousness. Then they interrogated me again. They interrogated me like that three times per day for seven days.

After I had been imprisoned at the pagoda, I was transferred to another place, Kach Roteh, where I was imprisoned for three months. There I suffered even more.

It was worse than being dead. The living conditions in that prison were worse than for animals. I was chained by the hands and legs to other prisoners, so we could not get up, sit or walk, and we had to lie down in the mud. During the three months I was imprisoned there, I was interrogated, treated inhumanely and tortured every single day. On top of experiencing physical pains, we also suffered psychologically. We lived in fear and panic because every night people were taken to be tortured and killed […]. In the end there were only two people left whose names were the same, me and another Soeurn. We were the only ones who survived. The rest of the 46 prisoners were executed […].

Everything that happened to me during my imprisonment under that regime that lasted 3 years,  8 months and 20 days was unjust and inhumane to me, my family and my relatives, but also to other victims and the Cambodian people […].

I kept this story hidden until recently because I thought that it would bring me even more suffering and shorten my life.  But the opposite is true – when I disclosed my story with the support from TPO, I felt relieved. So I strongly support the disclosure of stories about human rights violations during Khmer Rouge times and urge others to tell their stories. I hope that other victims also get the opportunity to disclose their story.”

Mr Soeurn benefitted from TPO’s Testimonial Therapy and took part in a Truth-Telling Ceremony as part of TPO’s project Truth, Reconciliation and Healing – Towards a Shared Future which is funded by USAID and the American people.